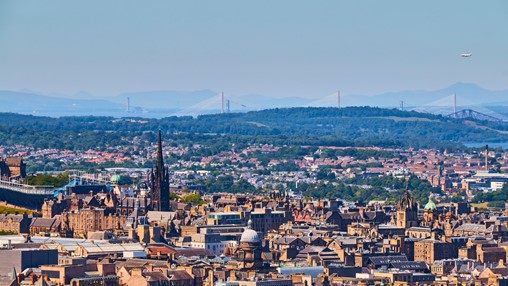 In 2015, Darina Garland and Kristian Tapaninaho decided it was time to leave London. Their portable pizza oven start-up Ooni had grown 270 percent since its launch in 2012, and they had established a global sales base. With a worldwide audience from the outset, relocating the business would help them capitalise on momentum. Their destination? Scotland. The chief draw was what Darina Garland refers to as the country’s “tribe” of innovative founders and companies. “What we found here was more than business success,” she says. “We discovered an ecosystem designed to support companies at the stage where so many fail – scaling up.” Scotland has 858 high-growth tech businesses, according to company data platform Beauhurst, and they have strong staying power. Ninety-two percent of Scottish scale-ups successfully maintained impressive trajectories even in the first year of the pandemic, according to the Office of National Statistics. Garland attributes this to a quality more often associated with the Californian scene. “We’re often told in Silicon Valley, everyone helps you. Businesses and founders know each other and are connected,” she says. “Scotland is like that too. There is a huge level of support and that makes scaling up so much easier to navigate.” The country’s scale-up programmes have been central to creating that collaborative network of ambitious founders and businesses. Ooni has benefited from these firsthand. For instance, the company was an early recipient of a grant from Scottish Edge, a funding competition which has invested £1.5m into 40 early stage, high growth businesses since it launched in 2014. “We have built connections here in Edinburgh that we don’t think we could have done anywhere else,” says Garland. “It has helped us grow a business that last year had a revenue of over £200m.” This environment has proven to be an enabler to businesses of all different stripes, as is clear from the participants in WIRED’s Trailblazer programme, in association with HSBC UK. The initiative shines a light on the innovative, small to medium sized businesses that are leading the way in delivering positive economic, societal and environmental outcomes. It includes a range of innovative companies in Scotland, spanning a number of industries. PureLiFi, for instance, is a leader in enabling communication of data through light; ENOUGH makes sustainable funghi based protein; Axis Studios is a multi-award-winning animation and VFX studio, and M Squared Lasers is leveraging technology to help achieve breakthroughs in areas as diverse as satellite earth observation through to cancer research. The group also reflects local micro-trends. One of the area’s attractions is that it’s just 15 minutes from the North Sea; there are 11 major ports and harbours offering access to waters rich in marine life, and Scotland lands over 60 percent of the UK’s total fishing catch. This helps explain a thriving sector dubbed “fishtech”. One of the WIRED Trailblazers, Rooser, supplies a modern trading platform for the seafood market. It has secured £17m in scale-up funding, following backing from Index Ventures, Google Ventures and Point Nine Capital. “We are streamlining an industry that will always be required as food and water are essential for life,” says Rooser co-founder, Joel Watt. In addition to injecting efficiency, its mission is to reduce food waste. "Around 35 percent of fish that is perfect at the start of the trading process doesn’t make it through the traditional supply chain because of inefficiencies,” he says. “Our platform will eliminate this waste.’’ Another trend is the area’s growing climate tech sector. Research by PwC shows that climate tech investment to Scotland has grown at five times the venture capital market rate over the past seven years. For Doug Baikie, HSBC UK’s Head of Corporate Banking and Large Corporates for Scotland, there are many reasons for this. ‘‘We are seeing a huge increase in investment in climate tech in Scotland. It’s partly down to Scotland’s natural features - big wind-swept landscapes, proximity to the coast and nearby metropolitan cities that can provide a corporate base.’’ Take Orbital Marine Power, which uses floating tidal turbines to generate energy. Its team is split between Edinburgh and the Orkney Islands. “From an R&D perspective this is crucial, because Orkney sits in a strong tidal stream and the resources we need are literally on the doorstep,” says chief executive, Andrew Scott. “At a commercial level, we need to be able to raise funds, access investors and governments and be easily accessible in return. That’s why the rest of the team is in Edinburgh.” While fishtech and climate projects have an obviously site-specific dimension, Scotland’s wider tech economy is not there by accident. Glasgow is one of the UK's top three fastest-growing technology investment hubs, according to Tech Nation. To a large extent, that’s a function of the sheer number of Scottish startup incubators and research hubs, including CodeBase, the largest tech incubator in the UK according to TechCrunch, The Higgs Centre for Innovation, and the University of Strathclyde’s innovation district. But it’s also down to the community and support networks that attracted businesses like Ooni to relocate. “The scale-up scene here is easy to navigate and we quickly found our tribe when we relocated the business here,” says Ooni’s Garland. “We have a seat at the table in Scotland that we wouldn’t have found anywhere else.”