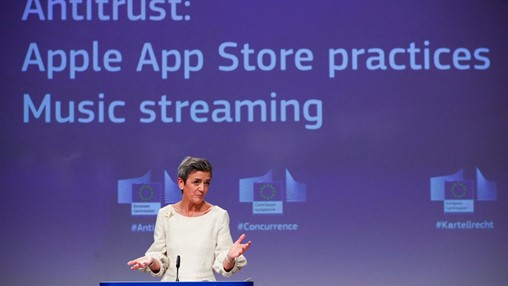 This year, the EU significantly overhauled its technology sector, especially its laws, impacting tech giants like Apple, Google and other players. After its victory in mandating USB-C, the bloc has shifted its attention to its next goal — opening up the Apple App Store, and its rivals. In May this year, we reported that the EU will introduce a Digital Markets Act (DMA) that will force Apple to allow installation of iOS apps from third-party sources. In November this year, the new law was passed by the bloc. The latest update is that Apple is reportedly working to follow it up with moves that could eventually force major changes to the iPhone and disrupt Apple’s lucrative app distribution model. Quoting people familiar with the efforts, Bloomberg reported that software engineering and services employees are engaged in a major push to open up key elements of Apple’s platforms. The changes would mean that customers could ultimately download third-party software to their iPhones and iPads without using the company’s App Store, sidestepping Apple’s restrictions and the up-to-30% commission it imposes on payments. The move is a response to EU laws which aim to level the playing field for third-party developers and improve the digital lives of consumers. Looking back over the years, regulators and software makers have frequently complained that Apple and Google, which run the two biggest mobile app stores, wield too much power as gatekeepers. Should similar laws be passed in other countries, Apple’s project could lay the groundwork for other regions, but for now, the company’s changes are designed to only go into effect in Europe. So far, the US has proposed similar legislation, the Open App Markets Act, which is currently being debated in Congress. Dubbed the Digital Markets Act, the EU law takes effect in the coming months, but companies aren’t required to comply with all of the rules until 2024. The laws apply to technology companies with market valuations of at least €75 billion (US$80 billion) and a minimum of 45 million monthly users within the EU. The law threatens fines of as much as 20% of a company’s annual global revenue for repeated violations. Since Apple generated nearly US$400 billion in worldwide revenue in the fiscal year 2022, it would put such a fine in the US$80 billion range. How will Apple be impacted by the new EU law? Apple makes a huge amount of profit from its App Store, which takes a cut of up to 30% from digital sales made through any app it distributes. While Europe spends less on iPhone Apps than America does, as a market for Apple, Europe is by no means insignificant. Of the estimated US$85 billion that the Apple App store has grossed so far this year, spending on iOS apps in the EU came in at about US$6 billion, according to an estimate from Data.ai. YOU MIGHT LIKE According to the same estimate, the US store was responsible for about US$29 billion. And a Morgan Stanley estimate published Wednesday said that in the very unlikely worst-case scenario for Apple, if alternative app stores in Europe resulted in a total loss of App Store sales in the region, it would only dent Apple’s services business by around 4%, its total revenue by roughly 1%, and its earnings per share by 2.5%. Even if the EU law forces Apple to break the App Store’s hold on distribution, the company could still find a way to take fees from apps distributed in other ways. “Apple has argued that the App Store is important for customer security, because software that Apple hasn’t checked could steal personal data or payment information. So if Apple does open up the iPhone to third-party apps or app stores, there are likely to be security requirements for developers,” a report by CNBC suggested. “Apple’s customers have long prioritized the security, centralization, and convenience that the App Store brings,” Morgan Stanley’s Erik Woodring wrote in a note on Wednesday. Ultimately, the details of how Apple will implement these changes will depend on how its lawyers interpret the Digital Markets Act. Apple also typically exhausts every single legal remedy available when it comes to challenges to its App Store model, including appeals, according to the Morgan Stanley note.