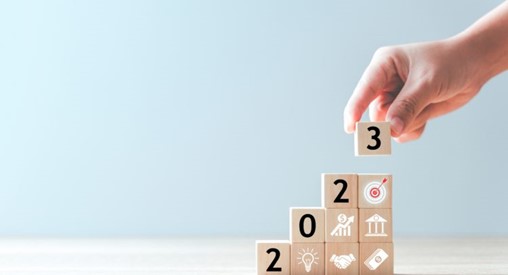 Friday marked the last trading day of the worst year for Wall Street in 14 years. The S&P 500 (SPX), the Dow Jones Industrial Average (DJIA), and the Nasdaq 100 (NDX) ended 19.4%, 8.8%, and 33.4% lower than they began the year, respectively. However, going into 2023, investors are more aware and are looking forward to the key economic data and updates that await them this month. The Year That Was On Friday, the S&P 500, the Dow, and the Nasdaq 100 ended the regular session with losses of 0.25%, 0.22%, and 0.1%, respectively. The S&P 500 and the Nasdaq 100 are firmly in the bear market territory now, each more than 20% below their recent highs. Today is a new beginning, yet sticky inflation, increasing interest rates, ebbing and flowing of COVID-19, and geopolitical concerns continue to keep the market volatile. The bear market is most likely to persist through the year. The worst-performing sector of 2022 was Communication services, which shed more than 40% of its value. The only sector to clock gains was Energy, which was up 59%. Although the market is likely to Labor Market Refuses to Press the Break The Bureau of Labor Statistics is set to report December’s employment data this Friday, January 6. The Bureau expects payrolls to have moderated to 200,000 additions in December. Nonetheless, the pace remains robust, indicating a still-tight labor market. Average hourly earnings also appear to have risen 5% year-over-year in December, which is much above the Federal Reserve’s 2%-3% target inflation rate. This means that there is still more room for the Fed to keep raising interest rates to effectively kneecap wage inflation. The unemployment rate is most likely to have remained adamantly unmoved at the historic low of 3.7%. The central bank is not expected to pivot until unemployment rises to at least 5%. Overall, as of November 2022, an average of 392,000 jobs per month were added last year, according to Labor Department data. The hiring pace was double that of 2019 levels. More Economic Updates to Look Out for This Month December’s undisputedly most awaited data, the Consumer Price Index (CPI), is due out next week, on January 12. The market is likely to rally if the reading drops on a month-over-month basis. However, the rally may not last long or indicate the beginning of a bull market, as there is still a long way to go before the fundamentals of the problem begins to change.