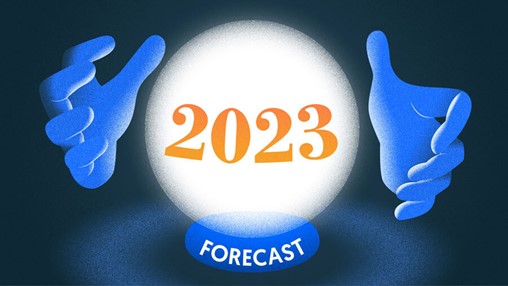 Coming off a record-breaking 2021 for startup investment, this year has marked a hard reset to more normal times. As we head into 2023 with recession fears top of mind, here are a few of Crunchbase News’ top predictions for what the new year has in store, based on our reporting. 1) IPO markets will remain sluggish, but if anybody is going public it could be these companies. While market conditions remain crummy, there’s also a huge backlog of late-stage startups that have to find an exit at some point. With that in mind, we offered up ideas for 15 companies — ranging from logistics unicorn Flexport to grocery delivery app Instacart — that could be public-market candidates if and when the IPO markets open back up. 2) Expect more M&A as companies go bargain shopping: Speaking of exits, we could see more mergers and acquisitions in 2023, dealmakers predict. Although rising interest rates make capital more expensive, there are plenty of deep-pocketed buyers who already have money to spend and could go bargain-hunting as startup valuations drop, sources told Senior Reporter Chris Metinko. 3) Cybersecurity valuations will come back to Earth: Even the well-funded cybersecurity sector isn’t protected from valuation drops. Industry experts who spoke with Chris about the outlook for cyber startups in 2023 say they expect fundraising and valuations will continue to soften. That’s despite 2022 easily being the second-best on record for VC funding to cyber companies. 4) Fintech will remain hot, despite the crypto crash: Fintech was the largest recipient of venture dollars in 2022, despite an overall drop in VC funding this year and despite high-profile crypto companies going bust. Next year will likely see continued investment in fintech companies, particularly in the B2B payments and business services space, though we should expect to see a pullback in crypto funding in the wake of FTX’s collapse, Senior Data Editor Gené Teare reports. 5) Investors may be losing their appetite for plant-based meat: Investment into plant-based meat startups has come to a standstill, Keerthi Vedantam reports, noting that funding into the sector fell from almost $2 billion in 2021 to around $800 million this year. The challenges are likely to continue next year as startups try to find a way to deliver plant-based meat products at a reasonable price to consumers, who mostly are not vegan or vegetarian. Still, the alternative meat industry did end the year on a good note, with the FDA in November approving California-based Upside Foods’ lab-grown chicken as safe for human consumption. 6) Biotech offers a rare bright spot: One area that could see continued investment even during a downturn? Biotech, specifically those companies involved with the so-called “omics” — think genomics, transcriptomics, metabolomics and proteomics. That’s because, as Keerthi notes, “many of these startups can turn a profit long before they actually make and sell a drug, simply by licensing out their platform to other biotech companies and employing a fee-for-service model.” 7) Novelty is in, copycats are out: Expect to see fewer startups position themselves as the “Uber of X” or the “Shopify of Y” next year, contributing reporter Joanna Glasner writes. While during times of easy money, VCs tended to glom on to follow-on startups riding a hot trend, that era is likely now over. Instead, “startup investors will be looking for novelty in the companies they back,” Joanna predicts. “Out with the me-too business plans. In with those quirky or differentiated enough to stand on their own.” And what are some of those startups? She offers a few picks, from bee startups to a defense tech unicorn.